Ellie playing with Pooh after her nap. 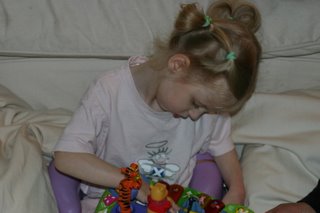 This post is dedicated to Ellie, who is the bravest little girl in the world and has had a rough day. The past few posts I have joked about this or that and in truth, it has been somewhat of a gallows humor. This blog is supposed to be about parenting a child with disability. Sometimes I get a bit punchy before facing really tough things. Things I would not choose to face in a million lifetimes if I had my druthers. And I have been facing today for a couple of weeks. Now that we have faced it, I can write about it and maybe save another poor mother or father some trouble. It’s not that we mothers of special needs kids are not informed. It’s just that each “intervention” carries an element of unknown consequences. When we were in the NICU we learned early on that all of Neonatology involved choosing between the lesser of two evils. Today we made such a choice and have lived to tell the tale.

To tell you what happened and why we did what we did I have to make sure you know some basics about cerebral palsy. For those of you already living the dream skip to the next paragraph. All children with cerebral palsy have varying and mixed degrees of Hypertonia and Hypotonia. Hypotonia means your kid has weak muscle tone and is “floppy”. These kids might have trouble holding their head up and sitting, etc. Kids who are hypertonic are stiff and in extension (arms out, legs out) a great deal. This is called spasticity. Dystonia is when you go to do something and you go into a rapid extension. Ellie, lucky girl, is Hypotonic with an overlay of Spasticity in her legs. To compound things, the act of growing can make spasticity worse. The interesting and awful thing that happens when the brain is damaged is that it turns things unendingly ON. In Ellie’s case the Equinovarus deformity from the spasticity in her ankles is due to muscles that are constantly being flexed and pulling her foot in. Try it and see. Flex one of your major muscle groups like your calf muscles or bicep. Hold it for as long as you can. Sucks, huh? But now you have a modicum of an idea what spasticity feels like. In a growing child such a thing can deform limbs. You may have seen people with CP who have a hand that is turned down at the wrist at a seemingly impossible angle and held close to the body. That is the result of spasticity, the constant firing of neurons to the muscle which in turn pulls the bones and ligaments permanently out of place to the point where eventually there is a complete loss of function.

Ok – there are some cerebral palsy basics for you. Today we went to the Floating Hospital in Boston and had Dr. Webster perform a Botox treatment on Ellie. Botox you say?! Yes, there is actually a more noble application for Botox than making sure no one sweats at the OSCARS and Reese Witherspoon’s pretty brow is not furrowed.

Dr. Harry Webster is on his game and passionate about his kids. He did the whole thing with good pain management and a deftness that comes only to those surgeons that are truly talented. He was in Flow. Which is just where you want someone to be when he or she pumps botulism into your kid’s leg muscles.

Some days I can’t believe the details of my own life. As an expectant mother you consider things like the kind of diapers you will use, the books you will read to your kid, the food you will feed then. Anyway, I know you may not know me well but these are words of high praise for a doctor. We are not the type of people who just blindly do what the doctors tell us. We have been putting off this treatment for two years. There are some interventions like getting Ellie a Fundoplication that we have outright refused. (I really need to write about g-tubes, eating and nutrition and fundo’s).

If you are facing Botox injections with your child, I really believe that deciding when to do it you should consider two criteria. 1. Is your child ready to walk? 2. Are they at risk of permanent deformation and contractures that will ensure they never walk?

A word on Pain Management:
Two years ago, among the many ‘signs’ that it was not the right time to give Ellie Botox was the fact that a doctor at another well-known hospital scheduled the treatment for her with NO pain management at all. After having seen the procedure today and my child’s reaction to it, I can tell you, providing pain management is critical. Getting Botox is very painful even when sedated. Botox is shot directly into the muscle. Ever had a tetanus shot? Multiply the pain of that by 100.

Our pain management for Ellie consisted of 3 things:
1. Emla Cream. This was put on the exact point of the injections including the shot of Versed. Like, most NICU babies Ellie has had over 200 needle sticks, so why add to that?! That said Emla only works on numbing the skin, not the muscle, which still hurts like a bear when poked with a needle. Again, think Tetanus x 100.

2. Versed. This was injected directly into Ellie’s thigh muscle and made her drowsy and is supposed to make her forget any of this ever happened. As I write that it sounds awful and if you click on the link and read the description you will think I am awful too to ever let my kid have that. I feel like some psychotic parent covering up their crimes with some designer drug. However, after seeing the Botox injections, I am glad she will forget because she would have never forgiven me otherwise.

3. Over the counter Ibuprofen the minute we got home. Dr. Webster said the injections are the hard part and once the Botox is in, it does not hurt. I wish I had Reese’s number so I could ask her directly. Does that stuff in your forehead hurt right after? And if so, for how long?

So you might be thinking, why not put her out completely under general anesthesia? Good question. Our answer is that this is counter indicated for anyone with any brain injury. When kids like Ellie go under they can be set back for weeks and possibly months in their functioning and development. It takes a long time for their brain and already weakened bodies to recover from general anesthesia. We minimize Ellie’s exposure to anesthesia as much as possible. For example, we have never had to give it to her for MRI scans of her brain. During MRI’s there can be no movement. We have been able to distract her with mirror balls and light and songs and whatever it took. For her ABR’s (brain response hearing test) we have been successful at scheduling them at naptime so she would sleep during the test. My main point is that sometimes medicine becomes dogmatic. I have a bias against younger practitioners who still think they are god but are too afraid to think outside of the box. For example, always pairing a g-tube with a fundo even if it ensures that the child will not eat by mouth. If a doctor’s answer to your question is ever, because that is the way it is always done, or any derivative thereof, find another doctor who thinks for him/her self and considers each patient a unique case.

As parents we have questioned everything and educated ourselves so we could make the best choices for this little soul that is in our care. No child deserves less. When we don’t know what something is, we educate ourselves. The only prerequisites we have are our abilities to read and think. There are a ton of resources on line (see the links in this post). We have bought many medical texts in order to catch up with the doctors and understand the choices being laid before us. We had to because our “Yes, do that” or “No don’t”, especially when Ellie was in the NICU, meant the difference between life and death for her. So we wanted to understand our choices. We found that the worst doctors don’t take into account the patient’s whole life. When they first told us about shunts I had questions about the tubing that would go into Ellie’s abdominal cavity and it’s effect on her reproductive organs. That stopped the team in their tracks.

Isn’t this a mother’s logic? I think about Ellie’s whole life from birth to death and I don’t want her choices limited because someone was not being thoughtful enough to consider all the implications. (Incidentally, this is also makes me a very formidable chess player that Dave still has yet to beat.)

We have also learned so much from other parents. In the NICU two very wonderful people who were a few months ahead of us in their journey gave us some very good advice. C and W told us to ask each question three times to three different people. Best advice ever for any parent facing a long NICU stay. We still do this. The thing is, you always get three different answers. Medicine is not an exact science that is why they say practicing medicine. Woe to any parent who does not participate in the thinking process of solving their child’s issues.

Upon climbing off my soapbox, I can tell you that Ellie is sleeping now. We will see if the Botox works. The next step is serial casting to get her feet back to neutral so she can stand on them. I know Ellie would much prefer to be able to ambulate or walk to get her toys versus having to roll a few feet, look to locate, and roll again. Ellie is a great roller but when you have to roll to get stuff you can get stuck on other things like couches and corners. Ellie wants her independence; this I am sure of.

Hopefully this path with Botox along the way will get us there. It seems the lesser of two evils. She is braver than me. I had to keep from sobbing during the entire thing. Once it was over she smiled at her Daddy and the sun shone again.
Posted by Kathryn at 6:06 PM 5 comments: Links to this post