Ah, there's nothing better than a man who knows how to handle a drill. 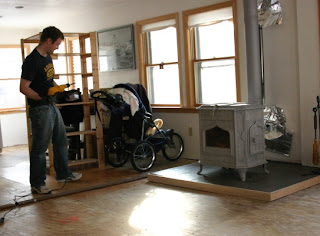 What is a three day weekend for if not to work on your ramshackle house? Yay for us! Yay for our initiative and optimism and courage in the face of the unknown. We are laying down a hardwood floor in our sixteen by thirty one foot kitchen/everything room. (I can't bear to tell you how many square feet that is as I may need to be medicated if I do.)

We have said a sad farewell to the plywood we had been living on for almost three years. The impetus for this farewell - the humongous splinter I sustained in my heal just minutes before the decision to finally finish the floor was made. Yes, that was how the madness began. Does blood poisoning set in that quickly? Maybe I just have a fast metabolism.

Dave and I are nothing if not spontaneous - this has it's pros and cons. Dave procured the wood through all manner of financial magic and space shifting to get 25 bundles of it home in our car. We (mostly him) started on the task. Sanding down rough edges, laying down red resin paper, figuring out how to make the whole thing straight so you don't feel dizzy when you look at it. Dave is a wizard to have figured this out in our 1935 wonder house where not a straight line or right angle has made an appearance since original beams were milled.

See the bit of white along the wall - that was my handy spacko work. I think we have already saved about $200 dollars on the heat we haven't lost. Why we did not think of that one three years ago I will never know.

However, spontaneity has its price and we are not two single people on for the task. No, we have a kid - you might have notice the beauty with the blond curls and most pinchable cheeks on the planet. Yes, well, said child doesn't just disappear because we have suddenly lost our sense of reason and decided to take on a huge task. So, since Dave is only slightly more handy than me, cough,cough, I would be the one to hang out with Ellie. No problem there, she's great company. But Dave quickly found out that laying down a hardwood floor is more of a two person job than we first envisioned. That same vision included finishing putting down the boards on day 2 and then doing the finish each night. See what I mean about having lost our minds?

Another price of spontineaity is that the few people we asked for help were unavailable. Yes, they are snug by their cozy fires, sipping their drink of choice, very happy that they had other plans. But we must have had some good karma due to us because this man showed up on the scene day one and day two. P is officially in my good books - FOREVER. He has made all the difference and single-handedly saved us from the abyss.

Stay tuned for more pics as the hardwood rules over the plywood splintered sub floor. We should be done in several months...
Posted by Kathryn at 4:39 PM 8 comments: Links to this post