Ellie and Nanny having a laugh. 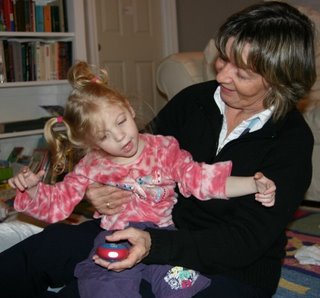 Ellie had a great time on her birthday this year which rendered the party a great success. I did things a little differently this year to really focus on Ellie. Each year for her birthday we have held a big party to thank all the people that have helped us along the way, which made for a big party where mama was busy running around as host. This year after a bit of agonizing and brainstorming, I decided that I would make an 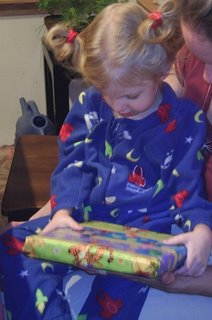 event that would include all the things Ellie loves most. I thought about what makes a good day for her, and decided to have a hyperlexic party where Ellie could go from person to person and do what she loves best - read. Though the school people think this is a "splinter skill" and relatively unimportant - we think it's great and our path to helping Ellie express herself. I also decided to spend as much time with her as possible instead of trying to be a Martha Stewart like wonder host.

I was lucky to have a small team of brilliant helpers that included Dada, (Grandma) Nanny Bernie and Grandpa Paddy. We still put on a big spread, but this year I did not invite our whole street and just kept it to family and Ellie's nurses. Ellie gets really overwhelmed by too much noise and too many people.

Here Ellie is styling in her new red velvet Starlet track suite compliments of Auntie Sue, and she loves her new scarf made especially for her by Maureen! 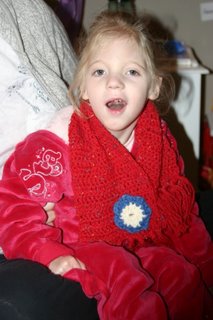 Nanny Bernie and Grandpa Paddy labled everything in the house with white lables and words written in big black letters. We made name tags for everyone on rainbow stickers (Ellie's current favorite song is the rainbow song from Signing Time) so that no matter who Ellie was hanging out with she would have a new word to learn - remember when I mentioned previously how she loves to read our logo shirts? Same idea. We also placed loads of her favorite books everyhwere so people could read to her. During the party Dave and I spent tons of time with her and she got to cuddle with her auntie Lauren and Uncle Brian and her Grandma Irene as well has her beloved Tiffany and Bonnie. For the cake Dave came up with the idea of making it in the shape of a 4. I then implemented this idea and added candles that spelled out Happy Birthday. We showed her the cake and lit each candle as we spelled the words with her. Instead of the birthday song, which Ellie doesn't like, I asked her what song she wanted to sing and she picked, "Ellie you are beautiful" a song I adapted from one a friend taught us. So we sang that and then we helped her blow out her candles.

Nanny singing softly to Ellie before we leave for the airport. 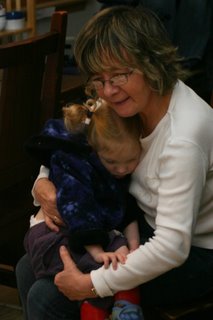 She went to sleep happy and contented if not a bit exhausted. I am not sure what everyone else thought of the party and it's help yourself eats, but I think Ellie enjoyed herself. Because I was spending time with her there are hardly any pictures, but here are a few from the last few days from November 9 to yesterday.

Nanny Bernie and Grandpa Paddy went back to Ireland yesterday. A fact Ellie is keenly aware of. She is still a little weepy today and has had to check out their room a few times to see if they have really gone. The rain is reflecting our mood. Thanks to everyone who helped us make the hyperlexic party fun for Ellie and for all the wonderful birthday pressies. xoxox

Posted by Kathryn at 12:39 PM 2 comments: Links to this post