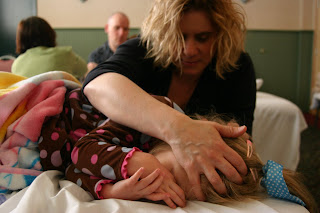 Ellie and I are on our first road trip just use and another mother and daughter. Our first mother-daughter thing ever...it's kinda cool.
She was a trooper on the 6.5 hour drive to Vermont. Google said it was only a 3 hour 45 minute drive but then factor in we got lost and had to stop twice - that's a really long trip. And I wasn't sitting next to her like I normally get to. So Ellie played and I got a crook in my neck. But after finally getting into the hotel and giving her dinner and letting her sit on top of me (because I am the human couch) and play with her toys she was much better and slept really, really well. She woke her sunny self.
We are here for a three day cranial sacral intensive workshop. From 9-12:30 and then from 1:30 to 4  a therapist will work on Ellie.  It's a spiritual thing too the way the therapists are approaching it. They used a  circle and talking stick to open and a short meditation and then on with the work. Ellie lit up when she saw her therapist, Amy. She was delighted. And Ellie isn't delighted falsely. She no room for anything but genuine reactions at least at this age. Ellie as been working hard. She kept drawing the therapists hand to where there is a non-working shunt in her head pressing on her occipital lobe. Together she and the therapist gently tried to shift it (fractions of millimeters) to relieve the pressure that causes Ellie to be dizzy and not be  in total control of her eye muscles. I really hope it worked. They also worked to remove the energetic imprint of that botched surgery. I need to let go of my own guilt about that too so that I don't hang on to it.
They were also working on some of Ellie's birth trauma which is not in short supply. And when I say 'they' I mean that is where Ellie decided to go. It sounds weird but it is a collaboration. We have done cranial sacral work with Ellie when she was 2 to age 3 and that got her eating by mouth. We have been doing it once a week for a year to help her again with everything. Growth is hard on her because of her Cerebral Palsy.
The whole experience after the first four hours has shown me just how connected we are to our children. When they were working on Ellie's birth trauma I got a pain where I had my spinal.  When Ellie was struggling with the emotions that came up around the shunt I felt it too.  That's the deal though isn't it if you really love your child? The good with the bad. The pain with the pleasure. You are never really free again and never alone again either.
It's amazing to see Ellie work so hard and stretch and grow into her full self. She is so relaxed now and sleeping so peacefully.  Pictures to follow.
Posted by Kathryn at 1:06 PM 3 comments: Links to this post