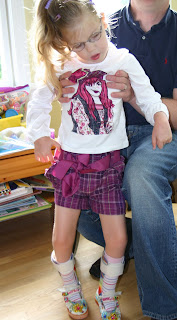 This is Ellie on her first official day of First Grade. She is growing up.
Next two pictures are of the pie Dave made with Ellie last night after we went apple picking. We found this great, small, easily accessible orchard, Dowse Orchard, and Ellie had a great time and we were able to wheel her right up to the trees. She picked most of the apples!
This is the first pie Ellie has ever made. Dave brought our coffee table into the kitchen and put all the ingredients on it ready to go and easily reachable for Ellie. He used the small dry erase to teach her about the ingredients. She used measuring cups and took flour out of the bag and put it into the food processor as well as the butter. We put the food processor on a switch. Ellie kneaded dough, put apples in the pie, shaped the dough round the edges. She did the spices and everything. Dave is so patient and enthusiastic about her. Even when she has moments of averseness to new experiences he never lets that dampen his sense of fun in the doing things with her! As a result, Ellie had a great time. You can see the E in dough on the top of the pie. E for Ellie, what else? She was very excited when Dave showed her the steaming hot pie coming out of the oven! Dave Rocks! 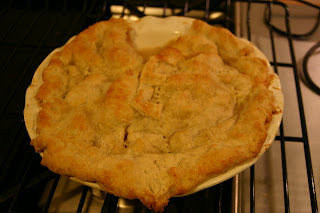 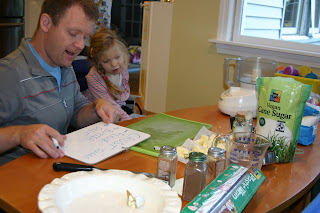 First time on the bus this morning. In the first picture she is pointing to her car.... In the second she is not so happy about going on the lift. Third picture is of Juan and Marge securing Ellie's chair. Fourth picture is Ellie in the wheelchair van...not looking too happy. Fifth picture, Ellie in the bus with a wall of glass and reflection between me and my only child. Did I prepare her enough for this...apparently not. Dave just called me and reported that the Juan and Marge said Ellie did not cry, but she didn't want to play with her toys and was very quiet the whole way to school. When she got there Dave was waiting and she did not give him her usual huge smile and the happy throwing up of her arms at the sight of him. Instead she was quiet....is this going to be an issue for her and her therapist later in life...? I imagine she is feeling somewhat betrayed and processing this change. If this makes her unhappy and she does not adjust the 3.5 hours of extra time a day is just not worth it. But I will give her this week to try it... :-( 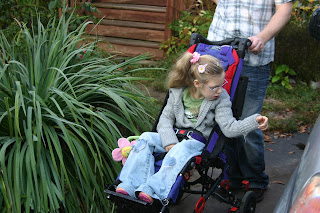 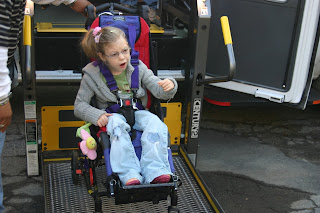 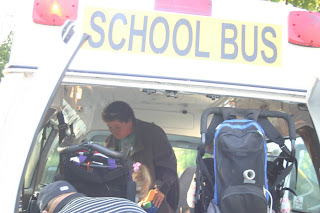 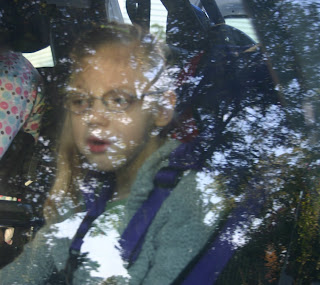 Posted by Kathryn at 8:19 AM 9 comments: Links to this post