Nic Nac, Paddy Whack, Get Ellie Atop a Horse! 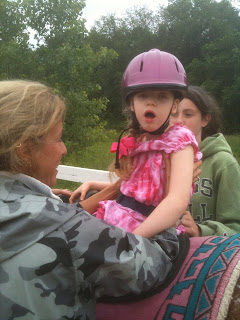 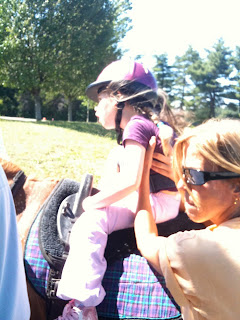 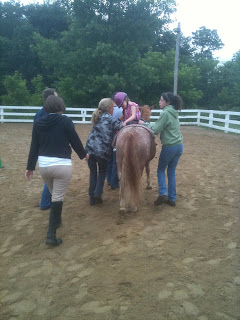 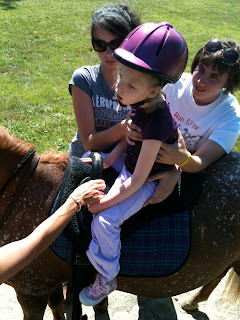 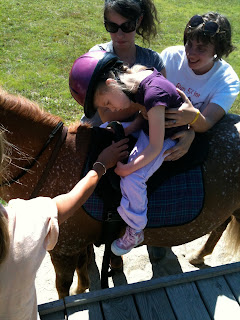 Nic Nac is a painted pony. He is recovering from obesity and in need of exercise because his rider outgrew him.

Ellie is a seven year old girl who needs: to loosen up her hips, weight bearing exercise, and therapeutic riding for gait training in the hopes she will one day walk.

It has been a match made in heaven. We have been, on and off for four years, looking to get Ellie onto a horse. The doctors have been recommending it. Our first calls to places that advertised either hippotherapy or therapeutic riding were met with 5 year waiting lists and huge fees. I have done four searches in all for this service and been met with obstacles. Stables either didn't have space, the right horse, were intimidated by Ellie's shunts, etc. The other big obstacle and the reason I didn't plow through these obstacles, was that I didn't know what it looked like. I couldn't imagine in my head Ellie safely riding a horse. I rode horses a very little bit as a kid. My neighbor's horses. And got bucked off once hurting my arm. All of it was totally unsupervised.

That's what in psychology they call a filter. My filter around this needed a bit of cleaning. Maybe yours does too if you have a kid who is floppy like Ellie. You gotta ask - how the heck are they going to do that? How will she be safe? What will they do if the horse runs out of control?

I think these are pretty sane questions. I know that I feel very protective of Ellie and the last thing I ever want to happen to her is any more injuries - she's had enough injuries since an early day one start in life.

But it was time, over due. This time I got Dave involved in the search too, especially after having a hard conversation with a local riding outfit where the woman asked me if Ellie could sit on her own. I said not for more than a few seconds. Then she asked me would Ellie need a rider to sit behind her, and my safety fears kicked in and I answered that, that would be nice. To which she replied, well we don't do that here. To which I replied - that's not a fair thing to have asked me then! I don't know what Ellie needs... and I explained my fears around safety but that she really needed this therapy for her well being and wouldn't they just assess her please! That's when I got Dave involved to look for other stables because I was tapped out emotionally - remember it's been a 4 year search.

That local stable decided to take her on, then changed their mind, and then called us back when another rider fell through. They were 5 minutes from where we live and on an opulent private school campus. They were not that friendly. But in the mean time between their acceptance, rejection, acceptance maneuvers, Dave found another riding stable called The Farm. They were really nice, welcoming in fact, versus leery and condescending. They are about 40 -60 minutes drive from where we live depending upon traffic but accommodated Ellie so that she could go on Saturdays. They were nice and their prices are very reasonable - in fact half the cost of all the other places we have called. They didn't ask if she could sit. They asked to meet her and assess her. They asked her height and weight and told us about Nic Nac the pony in desperate need of a rider. It was looking like the stars had finally aligned around this.

We went to meet them. Lauren, is the OT in charge with graduate degrees in OT and Therapeutic Riding and is wonderful. She is truly passionate about getting kids up on horses and kind and collaborative. Lauren is a teacher who knows how to push a kid such that they go beyond their limits but are not traumatized by the pushing. On her second lesson Ellie got on Nic Nac. I thought it would take weeks. On her third lesson Ellie rode Nic Nac twice around the farm not just the smaller riding ring. Ellie told me later that she liked Nic Nac but that riding him is hard. I agree. I think it will be easier as she gets stronger. She really liked giving Nic Nac a carrot. We are going once a week and had two weeks off for the 4th and a family birthday. Tomorrow will be Ellie's fourth lesson.

Did I mention, that for Ellie to do this, Lauren assembled a team of four other volunteers? That's how they do it - a team of people. Two people hold Ellie on Nic Nac's back. One other leads the horse. Another is there just in case and Lauren directs the whole thing and works with Ellie, teaching her how to hold on, encouraging her, making sure her body position is good. Lauren fitted out a special helmet for Ellie which you can see in the pictures where Ellie is in the purple shirt and the helmet is not sliding down - her third lesson.

Here are some pictures so you can see how it works. Picture Description from the top down:
1. The pictures with Ellie in her pink dress are from her second lesson and first time riding Nic Nac. She is all dressed up because she was coming straight from a birthday party. She started sitting side saddle until her hips loosed up and then she was able to sit astride. The blonde woman and the young girl are a mother daughter dynamic due who are volunteers and hold Ellie for the entire ride - quite an arm work out. It was their family member who outgrew Nic Nac and they are very committed to helping kids like Ellie ride. Also, you can see a belt at Ellie's waist. That has some loops at her back and is held onto at all times by one of the volunteers just in case Nic Nac decides to take off, they can get Ellie quickly off his back. Did I mention that Nic Nac is also an older horse? He is gentle so hopefully they will never ever have to use it. But it's a safety measure just the same and I am all for it.
2. That's Ellie in her third lesson with properly fitting helmet thanks to Lauren riding around the farm, wind in her hair. She was able to sit astride from the start.
3. Here you can see all the volunteers and how they work as a team - an amazing, warm hearted, volunteer, competent team! Thanks to all of them!!!
4. Ellie sitting astride Nic Nac listening to Lauren.
5. Ellie checking out the handle after Lauren explained how to hold on. And looking at the saddle blankets that were picked for their purple color - which is Ellie's favorite (pink is so age 6..). Also, the wooden platform you see is raised and it's a ramp so you roll Ellie up on it in her chair and that is how she gets on Nic Nac who stands beside it. Nic Nac is a great pony. He can be ornery with adults but the minute Ellie gets on him he knows and is his most gentle self. It's like it's his calling to help her with this therapy.
So if you are as cautious as me about this, I hope these pictures and post help give you an idea of how it works. Ellie's seven and has needed this therapy for a long time. But I am glad it's happening now after having found Nic Nac, Lauren and The Farm volunteers. I am glad we found the right place with the right philosophy because that makes all the difference.
Posted by Kathryn at 10:10 AM 6 comments: Links to this post