Lions and Rabbits and Turtles, oh my! 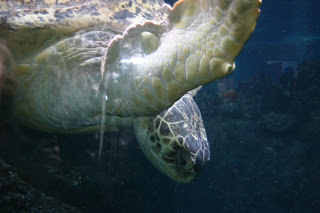 We did it! We braved a major tourist spot and made it out alive. We went to the New England Aquarium last weekend. The place was a mob scene and we worried that Ellie would be overwhelmed and shut down by the frenetic activity and noise of the crowds. I am happy to report that she did GREAT!

Ellie had been watching Signing Time Zoo Train . Her favorite part is the chapter about the aquarium and the song In the Water. So like any good concertgoers we played this video and that song, signing it to her, all the way there.

When we got there it was a zoo - no awkward pun intended. There were tons of people in line. Kids running around everywhere and a general happy din. Ellie and I waited for Dave to get the tickets. She insisted on my lap and we did her favorite signs, lobster and the crab that tickles her, about a million times. It was loud and Ellie was keeping a low profile and would not look away from me. When Dave finally got in, he carried her through the lobby, which was a major accomplishment considering it's cramped and awkward layout. After getting assaulted by random grockle traps in the guise of pushy photographers and navigating crossing lines of comers and goers we managed to muscle our way close enough to the big 5 story tank to see in.

It took a little time and some special encouragement for Ellie to work up the courage to look in the tank. She first explored the cement of the window casing and snuggled in Dada’s shirt but would not look in no matter how much we pointed and said and signed, "Ellie! Look at the fish!". 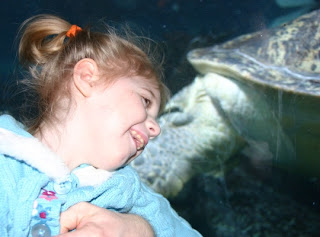 Then a GIANT sea turtle came up to the window we were holed up in and put his face right up against the glass facing Ellie. We of course got very excited by this and Ellie finally looked up and smiled and then laughed and got excited too. There he was, this giant turtle facing Ellie, nudging at the glass right in front of her for a few minutes. It was amazing. She was delighted. I wondered if he could see her or if the glass was a mirror on the other side. Either way, he wanted to get her attention and maybe, like Lion did, had some message for her. I think turtle is definitely another one of Ellie’s special animal guides/symbols.

Like I said before, sometimes you just have to open yourself up to the mystery of it all. Because after her encounter with turtle she looked at everything. Rode in her kid kart without issue. She got to touch a starfish and see sea anemone, harbor seals, penguins and many other amazing animals. After an hour or two of this I think I was more exhausted by the crowds than she was. It was a great time and we will go again. 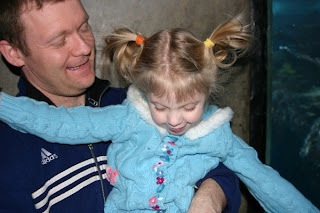 I was so proud of her. It seems she has really turned another corner. A year ago this experience would have sent her spiraling into a major shut down. But last Saturday, with help from turtle, all she did was enjoy it, explore it, and share her discoveries with mama and dada. I am so proud of my warrior princess!

Any thoughts on the symbolism of turtle anyone?

Tip: We got free discount passes from our local library. This required reserving them a week in advance and saved us a fortune.

Special Note for Uncle Rupert: Notice the fringe?! I finally cut Ellie's hair for the first time a week ago - just a little. It was getting in her eyes and no amount of elastics for the pigtails would keep it out of her face. So I very carefully cut a fringe. ;-)

Posted by Kathryn at 2:17 PM 10 comments: Links to this post