Get out and Vote! 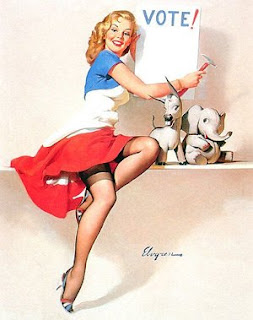 I am away again in the great state of Wisconsin. It's very dry here as the bad lands are not far away and all moisture gets sucked into them like a big burning dry vortex. I will be here all week. I was worried about how to vote. I called my town hall and they said come on down, but of course, not in as friendly a tone. Did I mention I live in Eastern Massachusetts where people are all business all the time? They don't feel the need for friendliness and niceness is something that was lost on the Mayflower. Maybe they are still feeling the repressive effects of the Puritans?
It took me all of 12 minutes to vote (see all that time saved by foregoing all the niceties). 12 minutes. In and out. I had to draw a line between two boxes with a special felt tipped pen. There were five other people voting at the same time and a steady stream of people coming and going for the same purpose. The atmosphere was brisk and efficient - a thing I do love about doing business in New England. There is none of the languid carelessness found in LA.
I handed my ballot to the poker faced lady at the counter and said, "No hanging chads with that!"
She brightened and said, "No they've made it a lot easier this year."
"Thanks!" I said leaving. It never fails to make a person feel good by noticing their work.
I think I just may have to vote early every election. No waiting, no lines, no stress - just exercising my constitutional privilege.
Go exercise yours! It's important.
If you suspect that things are not as they seem and your vote is in jeopardy - report the town clerk who may be violating the constitution and all that our nation was built on. CNN has a hotline you can find on their site.
I want my candidate to win but even more than that I want everyones' vote to be counted. I want our system to not be as broken as it is.
Posted by Kathryn at 7:56 AM 1 comment: Links to this post