Ellie was up all night with a migraine that was manifesting as massive clonus in both of her feet and a bad headache. Imagine having a foot cramp so bad that your foot vibrated like electricity was running through it and there was jack you could do to stop it. I spent the night holding my 7 year old on my lap and reaching at the awkward angle required to touch the tone inhibiting points in her feet that Ellie's PT showed me. It worked but I had to keep her foot in the hold for minutes to keep the clonus at bay. Every time I would release the clonus would come back. Clonus does feel like electricity because it is. It's a result of the neurons firing but ending up in a loop that does not go back to the brain but gets stuck in the spinal column so there is not shut off valve for the muscles to stop contracting. It's funny, you would think that brain injury would shut things off, and maybe it does in some cases, but in Ellie's, and anyone with high tone, it turns things on and keeps them on.
AND I was out of Motrin. Tylenol seems to do little for Ellie's migraines, though I gave her some anyway. That is how I spent the wee hours between 2 and 5 am last night, finally going in to wake Dave up for shift change. Ellie was up again at 7:45am. She wanted to sleep on me. Sometimes it's the only thing that calms her and I sit up and hold her on my lap as she buries her face in my shoulder. I love holding her and am glad it is soothing to her. The clonus is much less but my lower back suffers as it gets compressed under her weight which after hours of this has got to be 40 pounds.
When I was 21 I backpacked around Europe and my pack weighed 40 pounds and Ellie feels about the same. That's pretty heavy when it's just solid weight on you, like a 40 pound back pack resting on your stomach and thighs for hours...
Ellie has been up and tossing and turning and complaining all morning. I gave her some coconut milk and tried to get her to eat but it's a no go. Dave went out and got some store brand motrin (because the name brand has been recalled because of dosing issues - great - another thing to worry about) and we are waiting for that to kick in. I really wish I knew the trigger. It's hard to pin point. We did take her out for ice cream and she had some vanilla yogurt and she had chicken soup last night for the first time... We are going to give her Zofran now to stop the nausea so she can eat. Did I mention how much I hate these migraines?
Dave and I also finally came to some conclusions about the accessibility of our house and what to do. We were considering a stair lift so that Ellie could keep her upstairs bedroom but decided in the end to build out our back covered patio. It'll be as big as her bedroom now but a better layout actually. With her room there, we can put in a ceiling track and Ellie will have access to the whole first floor which will also have the accessible shower. I will not miss carrying her up and down the stairs. The room will have big windows and face out toward our rock garden and back hill, which is wild now but will have to be tamed. And if there is ever an emergency it will be much safer, faster, and easier to get her out of the house. It's nice to finally decide. The weight issue of this whole situation is number 3 behind death and lack of sleep. I have worried about it so much. But with things like ceiling tracks, it may be manageable. Ceiling tracks and back boot camp stretching and weight lifting. Taking care of yourself is important anyway for anyone, but seems to make all the difference in my situation thought not fool proof as the pain I am feeling now is evidence.
It's so hard to know what to do. Our house is this living constantly morphing thing.
I don't think we will make it to T-ball today. Oh, and Google's spell check, should know how to spell clonus!
Posted by Kathryn at 11:17 AM 6 comments: Links to this post

Email ThisBlogThis!Share to TwitterShare to FacebookShare to Pinterest
Labels: Migraines 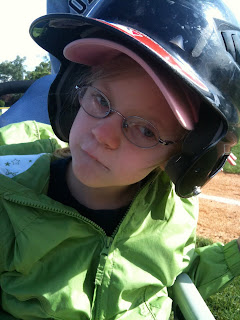 On Mother's Day Ellie played T-Ball and she had such a great time, such a good attitude that she got the Most Valuable Player distinction, complete with signed ball from the coach! What a wonderful gift on Mother's Day. The pic is of Ellie up to bat. Last year her head control was such that she couldn't wear this helmet and keep her head up at the same time. Progress.
We didn't walk in the March of Dimes walk after all. We were waiting and hoping the thunder clouds would abate, but they didn't, and lightening and wheelchairs are not a good match. Liz and Marla represented Team Warrior Princess and walked in the pouring rain and thunder. Thanks to Liz and Marla and everyone who donated to the March of Dimes. We will do it again next year and hopefully the weather will be better so we can participate in the actual walk!
Posted by Kathryn at 11:16 AM No comments: Links to this post

Email ThisBlogThis!Share to TwitterShare to FacebookShare to Pinterest
Labels: Ellie-Luv

Walking for the March of Dimes - Tomorrow! 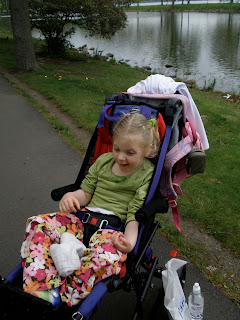 Hi everyone! I wanted to thank everyone who donated to the March of Dimes "Team Warrior Princess". We have raised $1,110 dollars total - exceeding my goal of $1,000.
We will be walking tomorrow and I will be sure to post pictures.
Thanks again to all who gave their support to this worthy cause of helping prevent premature births and supporting parents who have babies in the NICU.
The picture is of Ellie last year at the walk (she went with Liz who set up the site this year and is team co-captain). The crowds bothered Ellie so they took a breather by the river. Ellie had a great time just the same. It's amazing how much she has changed in just one year.
Wish us luck for tomorrow and cross your fingers to keep the thunder storms at bay. Lightening and wheelchairs are not a good match!
Posted by Kathryn at 10:44 PM 1 comment: Links to this post