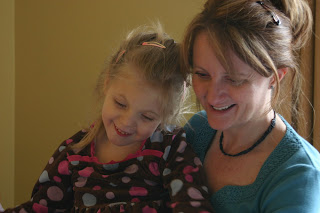 Email ThisBlogThis!Share to TwitterShare to FacebookShare to Pinterest
Labels: Rants

Posted by Kathryn at 4:46 PM No comments:

Awakenings and Weaning Off Depakote 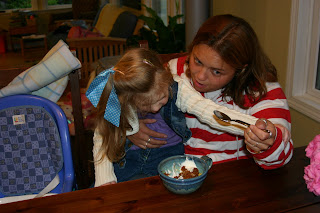 This post is about weaning Ellie off Depakote and has a metaphysical edge to it. So for those of you who are not philosophy fans this post is not for you. Just skip it. I however have my Bachelors degree in philosophy and ever since getting that education can't see the world without it - so bear with me.
I am weaning Ellie off Depakote against doctor's orders.
There it is.
The question that is torturing me is why didn't I do that as soon as it started making her sick? In 2007 when she was four and a half in April she started to have seizures. Small ones. I took her to her Neurologist who put her on Depakote and told me that someone with Ellie's history, I believe the technical term she used was "these kids", if they are gonna develop seizures do so between the ages of 3 and 5. And there Ellie was at age 4 and having these small absent seizures. She did throw up if she was eating and then she would sleep for 40 minutes. You can read about that here.
Within two weeks of medicating her, on Depakote liquid, she refused all food. This was a huge blow. We had worked with her for thousands of hours to get her to eat. No small task with someone with the level of dysphasia that she had out of the gates. And I mean we worked with her right in the NICU. At the point of the seizures she was eating ALL her purees (4 different meals) per day and that was about a cup and a half of pureed food in 15 to 20 minutes with us feeding her. This was a HUGE accomplishment on all our parts and was 4 solid years with over 8 hours a day, 365 days per year, which calculates to roughly 3,000 hours per year for over four years which is about 12,000 hour plus of working with her to get there. That's a lot of effort, heart and soul going into getting her to eat by mouth. Can you feel my pain when it was all swept away in a two week period?!!!
For her to just refuse food was a hideous thing. It had such a huge effect on me that I lost my objectivity and a little of my logical reasoning skills and my energy was deflated. I asked her neurologist about it of course and was told, no Depakote does not affect appetite other than to increase it. (so I must be crazy right?). No you should not try another drug, because Depakote has the least side effects.
I kept trying to get Ellie to eat for months. And was told, now she has a sensory aversion to food. She is trying to control her environment. It's become behavioral...
Ugh. And all this time I wasn't listening to my inner voice. Actually that is not true, my inner voice was going crazy, shouting "This is wrong! All these explanations are WRONG! Get her off that crap!!"
Now, in 2009, 2+ years later I was told that the Cisipride she WAS on causes seizures. She has been off that since January roughly - see here.   I have recently met a couple of adults who are on Depakote who do report that it makes them dizzy, tired, and nauseous.  Hmmmmm dizzy and nauseous and tired?  Go figure - if I felt all those things at once I wouldn't be eating either.
This realization hit me very hard this week. What the f*&% was I thinking leaving Ellie on the Depakote this long? I should have fought harder with the doctors to get her on a different drug. The Cisipride study showing the link to seizure activity was only made known to my by my Doctor in December of 2008. And back in 2003 when we put her on it Ellie's reflux was really horrible, so not sure I would have taken her off it had I known. Because she used to vomit 30 times or more a day.  But I should have used my logical reasoning better and worked harder to preserve her eating.
I feel like I lost my mind a little over this one. I feel that if Ellie had NOT had a G-tube all the doctors and everyone else would have been supportive of figuring out a better med for Ellie. I would not have been alone asking these questions, knowing something was very wrong but not sure what.
Now it seems so obvious. Now her eating issues MAY be behavioral.
She is on half of the Depakote dose she was and she has grown. I am sure that her level is way below therapeutic. I am weaning her very slowly to let her system adjust. She is less tired. She is enthusiastic at the table now and want to touch the food and feed us and she will sometimes actually taste it. She thinks meal time is fun and funny. That is progress and maybe she is feeling less nauseous.
Regrets are unproductive. There is no question of that. When I work on teams if something goes wrong my approach is always, ok, let's fix it and then figure out what happened so it doesn't happen again. There is no blame. But in the Mama role, I do feel like I let her down and that is a heavy burden. The me of today is like, What were you thinking? to the me of 2007, who was a very different person (that is the metaphysical part, in case you were waiting around for it). 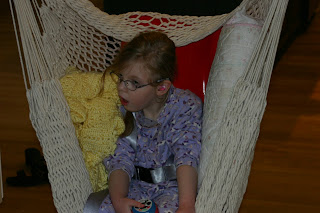 I know I am on the right path now with Ellie and the Depakote and that it was right to take her off the Cisipride. Her scope 6 months ago was proof of a very healthy esophagus and digestive track which the Cisipride, Slippery Elm, Zantac and Protonix and food combining diet were responsible for.   But man I wish I had figured all that out before now. Eating is one of the things that gives us something in common with everyone else.  Chewing food in the mouth is so important to digestion because there are enzymes in the mouth that are not in the stomach. It's healthy to eat by mouth.
I am hoping that once she is fully off the Depakote she won't feel so tired or dizzy or nauseous. I look at pictures of her when she was three and see this bright eyed girl with eyes aligned. Then pictures of her after show a blurry eyed Ellie. I want my bright eyed girl back. And for the record I am really sorry that I put her on a med that made her feel so exhausted and sick.
Posted by Kathryn at 9:31 AM 12 comments: