Western Cowboy dancing as bullets are fired at his feet

What do all these things have in common? Just the mere fact that they describe the labyrinth we are in right now trying to figure out what is best to do for Ellie. I haven’t posted much because I am trying to get information from doctors and as such slave to my unending phone list that continues to shrink and grow like some big fat freakish cyber worm that thrives despite chunks being eaten out of it by little persistent mothers.

Here is the thing, Ellie has reflux. She has seizures. She has massive hypotonia with an overlay of spasticity in her ankles. She has a vision loss that has increased from 20/60 to 20/260 in two years. She has a mild hearing loss. She has strabismus in her eyes that has gotten much more out of control over the last six months. Over the last 3 months she has gained two pounds and 1.5 or more inches to weigh in at 28 pounds and measure at 38 and half inches tall.

She is in a growth explosion.
She is changing cognitively as well as you might have noticed from all our days out where instead of cowering in her stroller she is happily taking in her world in the sponge like way little kids do.
She is a joy – just don’t want you to forget that. My anxiety is high because I want to preserve her life. I want her to live a long time healthily and happily. I don't want any big disease monsters to swallow her up or rip her out of my arms.

But because of reflux and seizures and constipation (the first and last have everything to do with being Hypotonic which includes all the sphincters in her body) she is on a ton of meds. Cisipride, Zantac, Protonix, Myralax, Depakote. She has been on the first three for four years and on the Myralax for 2 and on the Depakote for sadly 1 year. That’s a lot for a little girl's liver to take. We recently got the vision report that told us that she had this HUGE vision loss. Though in going over it with her neurologist yesterday we decided that it wasn’t totally conclusive and have to get her a couple more tests to really know for sure (did you hear that?! My cyberphonelist worm just burped loudly!). That said the whole wandering eye thing is something that is noticeably obviously new and different.

Because of this we started to really research all the meds she is on and look for evidence of drug interactions. Or at least Dave did. He did because I freaked out about the vision loss and was in a panic over it and told him my gut was telling me it had something to do with the Cisipride. So Dave, with his awesome amazing brain that is 2 parts Sherlock Holms, one part Copernicus, and millions of parts amazing computer scientist internet savvy guy found this site that tells you about all the meds in depth including rare side effects.
Guess what we found? A rare side effect of Cisipride is seizures and vision change or loss. A rare side effect of the Depakote (that we are using to treat Ellie’s seizures) is vision loss. So here we are treating Ellie’s reflux with diet and meds. Happily giving her a medication that could be the cause of her seizures though it’s really hard to know and then in turn medicating her for seizures with a med that can negatively effect her vision.

Someone, anyone, please shoot me now.

I am not quick enough for all of this medical Ju-jitsu.
All along we have been adamant about NOT treating her reflux surgically (meaning getting her a fundoplication which I have written about before) because we were sure she would stop eating because it makes it hard to swallow at least according to many adults who have written about it on the Internet. Most of them also reported losing 10% or more body weight, which would be a horrible thing for my Skinny-Minnie girl. Though these days the ribs are not as noticeable (her cheeks have always been quite full despite low weight). How many 3 year olds do you know that weighed in at 22 pounds? Now at 4.5 years old she is whopping 28 pounder.
Ironically and sadly, last May, she stopped eating completely by mouth despite our best efforts.
Most nights she wakes up multiple times for hours at a time due to reflux. I think on the nights she doesn't wake up it's not because she is not refluxing but because she is so exhausted. The Gods of Sleep through the Night are actually the Gods of GERD. F&CK%R$!

Here are some options:

1. Continue to treat the reflux with medications that are only minimally effective and will certainly one day in the not too distant future ruin her liver which would be fatal on top of having all kinds of other side effects including seizures and vision loss.

2. Take her off the Cisipride, Zantac, and Myralax and take our chances. Go see the “Witch Doctors” including acupuncturists, herbalists, naturopaths, homeopaths, and on and on to try to find alternative solutions for reflux or diet change even though she is already on a low acid diet that I have written about extensively. I still believe in this diet as she is gaining weight on it, has the most beautiful skin and hair I have ever seen and it has been vetted by a nutritionist who is open minded to not personally supporting Enfamil. She also is much less gassy and vomits less on it. But it's not perfect.
Also, no insult to said Witch Doctors. I have had quite a huge healing of my own tattered first two vertebrae because of Network Chiropractic – which I am huge believer in because it delivered me from years of chronic neck pain. But the problem is, no two WD’s say the same thing about Ellie. In my gut I know to explore with caution and I will. But it all takes time. If we take her off the reflux meds the big, her esophagus is going to disintegrate clock, starts ticking - LOUDLY like in Poe’s Tell Tale Heart (please somebody know that reference!).

3. Realize that her reflux will be here until stem cells can heal her brain which is probably several years away and get her the fundoplication surgery and get her off the meds. A good friend and uber nurse told me that she has seen more than one child stop eating when they develop cognitively enough to realize that when they eat they get painful acid in their throat and mouth – this could certainly be what happened with Ellie last May. And that when they get the fundo and no longer experience that pain, start eating and get rid of their G-tubes. All that said, I still know implicitly we did the right thing not getting Ellie the fundo with her G-tube when she was one month old corrected and under 4 pounds. 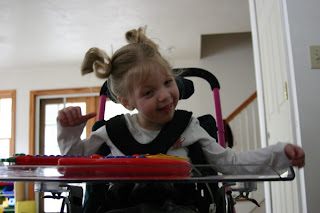 G-tubes and fundos are NOT necessitated as some doctors might lead their patients to believe. Also, for the doctor I heard tell this to a mother in the bed next to our, G-tubes are NOT like wearing a wrist watch. I think he needs to get one and see if that analogy still fits. Some Residents are such idiots!
Rant, rant.
But if you follow this link to the description to this surgery you will realize quite quickly why I am not a fan. It just seems so barbaric and awful and God I hate the choices before me for my warrior princess pigtail sporting cutie pie. It’s just not fair.

So there are our options. Sucks doesn’t it?!
Posted by Kathryn at 5:48 PM 20 comments: Links to this post