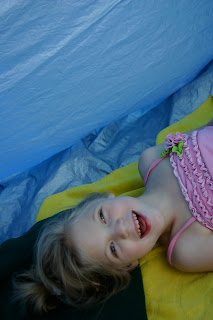 Ellie's migraine lasted for about 8-10 hours. She didn't vomit this time and I kept giving her all her food so that on top of a sore head, she was not also hungry or dehydrated. It's hard to say because she, sadly, has a very high pain tolerance. I gave her Tylenol and Motrin and she went to sleep that evening and slept through (that was Monday). Tuesday we were getting buckets of snow so she stayed home, which was good so I could watch her. Though she looked tired she played all day and was in good spirits. She had a low grade temp on Tuesday morning as well which goes along with what we are learning about abdominal migraines. I think she was in a little pain still on Tuesday. However, it is clear to me now that migraines mess with, you guessed it, her sleep cycles. She fell asleep on Tuesday around 9pm. She woke up a couple of times in the night and was still tired the next day. On Wednesday she was up until 9pm and then again at midnight and was not easily persuaded back to sleep and tossed and turned. At 4am on Thursday she was UP. And I mean wide awake and wanting to play and sign and any suggestion of going back to sleep was met with a howl. She also told me she was hungry and the aowie in her head was gone.
I brought her down stairs and gave her breakfast and we played until it was time to got to school. I was expecting a call around noon saying she was crashing and to come and get her. No such call. I picked her up at 3pm and her teachers reported she was in good form, totally engaged all day and not wanting to nap at all. She finally got sleepy around 8:30pm Thursday night and slept through.
Migraines, yet another thing to learn about.
The Why question is still on the table. Root causes the doctors are saying are anything from cyclical vomiting, abdominal migraines, to deep brain seizures.
What they are not considering, at least verbally to us, is the withdrawal issue. Withdrawal from Protonix and Depakote, which is still not off the table in my mind. They in fact are saying if Ellie's symptoms are bad to put her back on the Depakote, which for many reasons discussed in prior posts I don't want to do.
If this is hereditary migraines, thanks to my side, then we have to treat them with the Periactin and pain killers. If this is withdrawal, hopefully they will end as soon as her liver has a chance to process all the toxins.
Neurology is difficult because there is so much they don't know about the brain. I am glad that this time Ellie's symptoms were less severe, no vomiting or nausea that I could tell, and a shorter time of head pain (either that or she is getting used to it - which really upsets me).
The question is, what is acceptable in terms of her symptoms? And this time instead of being a week in between symptoms, there was only a few days. What if she starts having these episodes every few days? What if, what if, what if? I have more what ifs and whys than I have answers. I wonder if it the answer is staring me in the face and I just can't see it. I want to see it, I want to do what is right for Ellie. I don't want her to be in pain. What am I missing?
**picture description: Ellie laughing in her tent this summer in Carmel-by-the-Sea
Posted by Kathryn at 11:41 AM 3 comments: