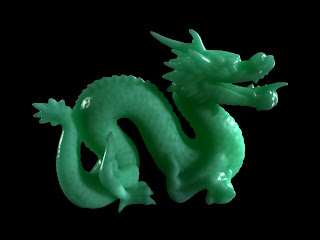 I think I am.
We had Ellie's Individual Education Plan (IEP) yesterday. I loved what was written. IEP's are very hard to get right in terms of balancing the laws of your state and the needs of the kid and having them make sense and be descriptive and succinct enough to be workable by many. This one was beautifully written with a genius that has written Ellie's IEP since she got to her current school. Each therapist as well contributes to this great foundation that was laid two years ago now. For that I am very grateful having witnessed a truly ridiculous and inappropriate, nonsensical that was produced by the public school. I know the difference from a good one that makes sense and is actually about Ellie versus one that is about everyone ideas about a kid with CP and brain damage who is NOT my Ellie. There is a big difference and her current IEP is brilliant in all aspects and especially in comparison.
That said, I was also happy to make some specific additions.
The additions I advocated for were made, sometimes right away, but many times only after I insisted several times like a broken record. That's fun feeling like you are being unreasonable when you know you are not but you are the only one willing to say what is unsaid by the group round the big conference table. Good times!
One addition I had to insist upon was the use of Intellikeys keyboard because we are using it at home. I feel I am still at odds with the school about Ellie using multiple modes to communicate.  Not once did the AT specialist use the word Intellikeys. I felt this was a sign of resistance and am not sure they will support the use of it by others. This really bothers me. This makes me think I need to check in and track it to make sure it is supported as much as the other modes this person prefers. I feel like my wishes for my daughter are not respected when I have to do this. I track conversations for a living and diagnose and intervene on group dynamics and leaders not towing the line for the team. I know what this looks like. It's a bummer to see it in this setting. In this case the person thinks they know best with a conviction that is unshakeable and unassuageable and isolated from dialog or external input.
Their argument is that Ellie's energy runs low at times and for those times she needs different ways to communicate. I get that, it's not a bad argument. My argument is that she has great use of her hands so let's optimize that and give her a chance to build up her stamina.  I have seen Ellie's eb and flow of energy. I get it, but I will not buy into limiting her because of it or using it as an excuse. Ellie LOVES to be busy doing different things. If she is mentally stimulated she will wake up for whatever it is. My argument is also around having the right physical set up for Ellie to succeed in. One of the therapists in the meeting noted that when Ellie had the right positioning her accuracy went from 30% to 70%. That is a big deal. They are tracking her accuracy so they should have the right set up right away. Everyone agrees on this in theory but it doesn't always happen.
The jaded part comes in where I think I need to watch it closely. The part where I wanted things explicitly stated in the IEP. I hate being like that but after this year of struggle I feel like there is no safe place. Yes these people care about Ellie. But she is my responsibility for the rest of my life. That makes my concern far deeper and different from theirs. When they get defensive, I just feel suspicious. And that is jaded. Sigh. 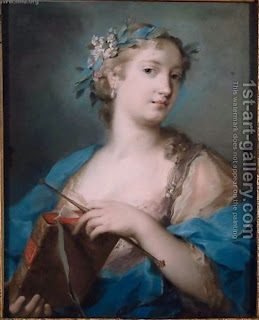 Maybe no parent can ever rest on their laurels (what are laurels anyway?). But sometimes it just seems like there a way too many plates spinning in the air for far too long. Way too many battles to fight and plans and
strategies to implement and watch over. Ellie's worth it and then some. But still, I feel jaded and untrusting and that is not fun. I know I started out very trusting of life and with this feeling that people always do their best, because I do.
Now I am jaded.
What's next? Where do you come out on the other side? It's gotta be a place where wisdom resides - just not sure what it looks like yet, but looking forward to getting there...
Posted by Kathryn at 5:11 PM 11 comments: Links to this post

Email ThisBlogThis!Share to TwitterShare to FacebookShare to Pinterest
Labels: School

There were no tears only excited happy dances and finger spelling the numbers of bases run.
Posted by Kathryn at 9:46 AM 3 comments: Links to this post 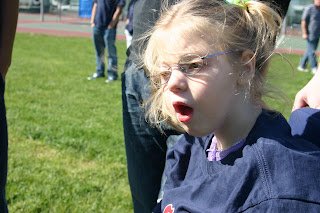 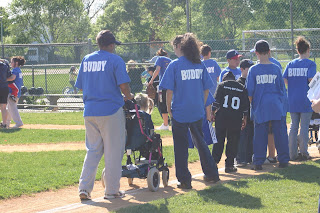 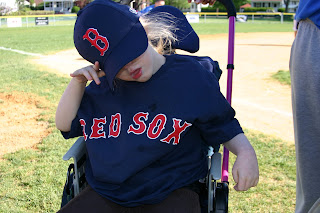 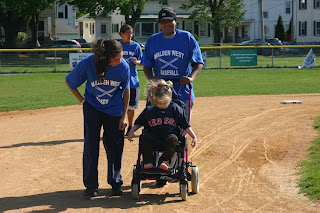 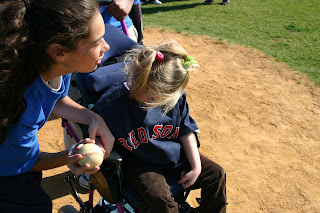 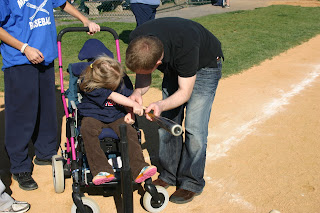 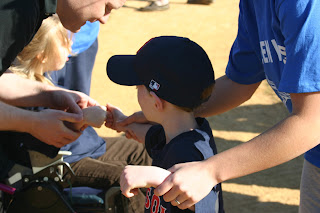 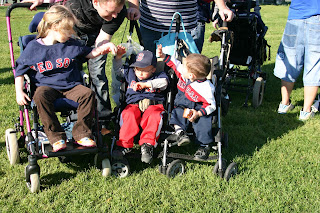 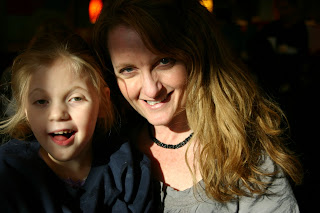 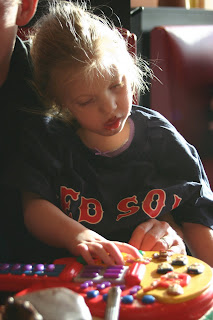 Last Sunday we took Ellie to her first T-Ball game, which was on Mother's Day. And it was the best Mother's Day present ever!!
Thanks to M. S. and the others like her who make this possible.  Ellie's team is called the "Red Sox" go figure. The high schoolers you see wearing the "Buddy" shirts take the kids around. We got to varsity soft ballers who by the end of the hour had learned some sign language and showed Ellie how to throw the ball, bat off the T (hence T-ball - thank God right? was really worried about someone pitching the ball at Ellie and was very relieve that is NOT how it works), and running the bases. In some ways it was a difficult hour. Ellie was scared and everything was new. There were tears and protests. Dave and I were allowed to jet out onto the field to give her support and explain about the baseball diamond and count the bases. After 50 minutes and she hit the ball off the T she started to enjoy herself. She especially loved the fist tap with all the other players at the end.  After the game we all went to dinner and Ellie tried chocolate cake - that is what is on her lips in the last pic.
I learned a lot that day. For one, Ellie did NOT like the hat. I wonder if she is a closet Yankees fan. Either way, I got her a pink Red Sox hat today and when I showed it to her she smiled. I also got her a pink and purple leather sparkly glove - which she seemed to like too. I also learned that there are ways to get out in the world if you look hard enough. Thanks to Holly for telling me about this. Isn't it always the other parents that you learn the most from? It has been that way for me since having Ellie.
We are going to go every Sunday. I am so happy to get to have this experience. In some ways I often feel very isolated from life. Marie, the woman who runs it and conceived it and started it, has opened up the world for us in a way that is extraordinary. Thank God for people like her and everyone who helps her. We hope that Ellie will get more comfortable and that we can sit back and cheer her on with the other parents. Having never had that experience, I am looking forward to it!
Posted by Kathryn at 7:30 AM 5 comments: Links to this post 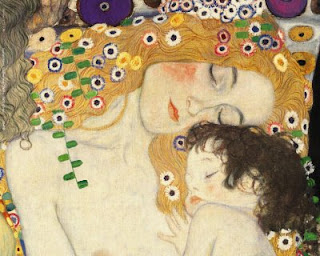 My beautiful friend Julie, also known as Queen of the Meadow, sent me this endearing, funny video with a heartfelt feminist twist to wish me a Happy Mother's Day.
Thanks Julie - coming from you that means a great deal because you are one of the best most ingenious, loving mom's I know! You made my day and you made me laugh which is always good for the soul.
Miss you!
I have to say I have been fortunate to have had chance to learn from some amazing moms. Thanks for all you have taught me and all the support you have given me Holly, April, Kate, Julie, Jacqui, Billie, Linda Scotson, and Sue and all the many mothers who chime in on  this blog. Thanks for keeping me honest and keeping it real.  Hope you all have a great Mother's day!
Posted by Kathryn at 6:45 PM 1 comment: Links to this post