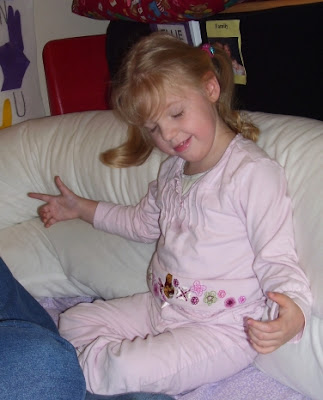 Here is my superstar sitting barely supported, arms out dancing to a wiggles song. I am so proud of my warrior princess! Here Ellie is sitting cross-legged and dancing. Thanks to Kristin for this pic.
In other news the Little Miss walked into the bathroom all by herself in her Pony gait trainer and was very proud of the fact. (Why the bathroom? No idea except that it is a little room off the kitchen that is Fascinating - don't ya know?!)
We have decided to go with a PERC lengthening surgery on both feet as well as to release the side tendon that is making her foot toe in. When we look at her in her Pony and how much she loves it and how little time she gets in it because her feet are too twisted to stand her AFO's it seems the obvious thing to do.
A note on PERC lengthening - we found out that the guy who does them in New Jersey is not the only one and there are lots of docs out there who do. I was shocked when in discussing what to do Ellie's doc started to describe the PERC lengthening and I said, "Oh you do PERC lengthening?!"
Ellie's surgery is going to be on the 30th of October. I will describe it more later. But keep her in your most positive thoughts on that day.
Posted by Kathryn at 5:21 PM 16 comments: Links to this post