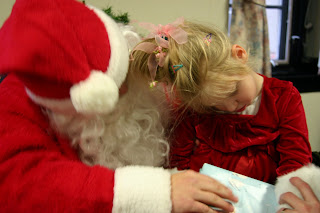 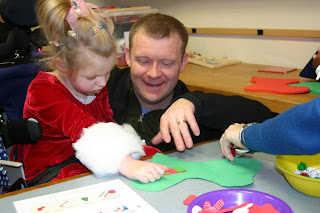 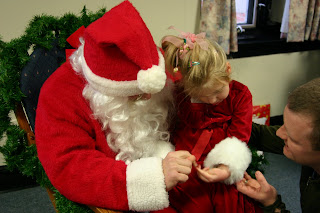 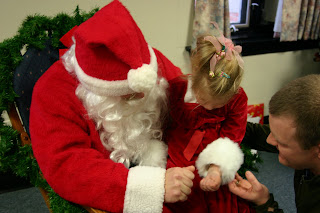 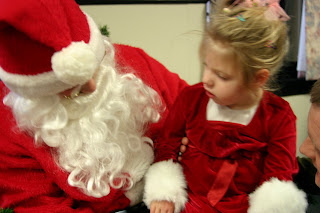 The order of the pictures is a bit off but the very last one is when Ellie first sat on Santa's lap. She met up with Santa at her school's holiday jubilee this December. She wasn't too sure about her dress until Dada saw her in it and said, "Oh Ellie, you must be one of Santa's helpers in that dress!" After which the dress was perfect!
She was in awe to say the least, when she finally got to meet Santa. After she had said her initial hello which consisted of her taking in Santa for a good thirty seconds. She immediately finger spelled S-A-N-T-A and Santa, being the awesome guy he is, knows sign language and was properly impressed and Ellie equally as delighted. You can see Ellie making an A and an N in one of the pics. You can also see her gluing decorations on a stocking and receiving a gift from Santa.
It was a great day. The best part of course being S-A-N-T-A!
Posted by Kathryn at 4:06 PM

Email ThisBlogThis!Share to TwitterShare to FacebookShare to Pinterest
Labels: Ellie-Luv

Great photos! This is so sweet. She looks absolutely beautiful in that dress—I would like one for myself!

How sweet was THAT! Love the dress!

Thanks! Mommy and me dresses would have been great! Target, however, did not make em for the adults! :-)